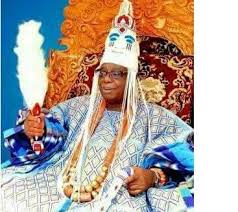 The Deputy Governor of Ekiti State, Chief Bisi Egbeyemi, on Monday in Ado Ekiti praised the Ewi of Ado Ekiti, Oba Adeyemo Adejugbe, on the occasion of the traditional ruler’s 75th birthday and 30th anniversary of his ascension to the throne.

While commending Oba Adejugbe’s  pivotal role in the creation of Ekiti State and development of Ado-Ekiti since he ascended the throne 30 years ago, Egbeyemi said  the virtues of the Ewi was worthy of emulation by the people.

The deputy governor said this in a statement signed by his Special Assistant (Media), Odunayo Ogunmola, describing the Ewi as “a beacon of light and king, who exhibits fear of God in his undertaking”.

According to the deputy governor, the Ewi is an embodiment of God’s grace and mercy, an epitome of humility, a lover of peace, a bridge builder.

Egbeyemi said Oba Adejugbe demonstrated immense dedication to peace, progress, prosperity and development of Ado-Ekiti in his 30 years of reign, bringing about growth in leaps and bounds.

It was reported that the deputy governor had earlier taken part in a special birthday service in honour of the Ewi at the Multipurpose Hall of the Ewi’s palace.

Other traditional rulers, political leaders, clergymen and prominent indigenes of Ekiti State attended the service  presided over by the Most Rev. Christopher Omotunde, the Anglican Archbishop of Ondo Province and Bishop of Ekiti Diocese.

He said: “Kabiyesi, God is worthy of praise for giving you this opportunity to witness and celebrate this landmark birthday in joy, good health and fulfilment in appreciation of the unprecedented development witnessed in your domain since your ascension to the throne.

“Your role as s peacemaker and a giver of priceless advice to the government at critical times is also recognised.

“This government led by His Excellency, Dr Kayode Fayemi, in which I, a son of Ado-Ekiti, is serving as the Deputy Governor, has benefited from the wisdom God endowed you with and we will continue to be grateful for this.

“You are a beacon of light, a shining star, an embodiment of God’s grace and mercy, an epitome of humility, a man of character, a lover of peace, a bridge builder and a king, who exhibits fear of God. Long shall you continue to reign on the throne of your forbears.”

Also, Egbeyemi urged all indigenes of Ado Ekiti to join forces with their Oba, to take the town to greater heights.

He said the birthday celebration had provided the traditional ruler an opportunity to count his blessings and to rededicate his life to peace and progress of the Ewi’s domain, Ekiti State and Nigeria in general.

It was reported that at the Thanksgiving service at Ewi’s Palace on Monday, the presiding priest, Archbishop Christopher Omotunde, said God had given the Ewi an uncommon grace, which should be reciprocated with more service to God and humanity.

The archbishop, who commended the Ewi for his humility, said his character had earned him more honour.

Omotunde counselled the celebrator to always be guided by the fear of God in taking decisions, saying “anybody who does not fear God is a great fool”.

He also stressed the need for the congregation to ponder on life after death, saying that everybody will give account of himself to God in the hereafter.

High point of the occasion was the cutting of the birthday cake by Oba Adejugbe in company with his wives and other dignitaries.