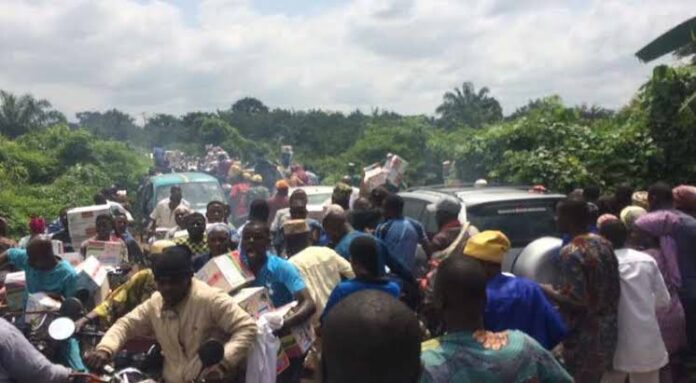 ..Says no direct bearing of Food Committee with the State Government

The State of Osun has blamed delay in distribution of food palliatives looted at Ede Warehouse on a formal flag-off by the CACOVID Office, Abuja and lack of authority to distribute the food items without approval from Abuja.

This explanation in a statement by the Secretary, Osun Food and Relief Committee,Alh. Bayo Jimoh states that the explanation has become imperative to put the records straight in view of the falsehood and the misinformation making the rounds about the donated relief items.

“We are in receipt of information that the Warehouse in Ede, where we kept the relief materials donated to the Osun Food and Relief Committee by the Private Sector Coalition Against Covid-19 (CACOVID), has been attacked and food items carted away.

According to Jimoh, it is not true that the food items were hoarded and they have no direct bearing with the State Government, as they are within the purview of the Food and Relief Committee.

” The items can only be distributed after a formal flag-off by the CACOVID Office, Abuja

and we do not have the authority to distribute the food items without approval from Abuja,” he said.

The Secretary pointed out that the distribution was also delayed because the Committee is still expecting the rice component of the donated items, which is 40, 230 bags of 5kg.

However, he affirmed that the rice components of the donated items are yet to be delivered up until now.

He added: “The Committee wrote to CACOVID as recently as September 28, 2020, reminding it of the rice component, which is yet to be delivered.

According to him, part of the letter reads: “I wish to refer to our letter on the above subject and wish to request for the recent update on the rice component expected to have been delivered to the State, and also to seek your advice on the exact time the State should expect delivery, considering the fact that items already received into the Warehouse are food materials and are perishable with limited shelve lives.

“May I recall in our previous discussions that the delay experienced is due to increase in cost of rice and delivery, that the amount paid to suppliers could no longer cover cost of purchase and delivery to Osun. “

However, up until this moment, we are yet to receive response from CACOVID

All these are part of the reasons the items were still in the warehouse up till the time of the invasion.

“This is the truth about the status of the donated relief items,” he asserted