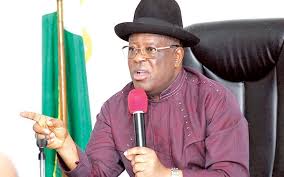 The sack is contained in a statement by the Secretary to the State Government, Dr Kenneth Ugbala, released on Wednesday in Abakaliki.

According to the statement, the action is in keeping with government’s policy on inclusiveness.

Other appointees affected in the latest action were Liaison Officers and Management Committee members of the three Development Centres from the LGA.

“The affected former appointees are by this announcement directed to submit all government property in their custody to the office of the SSG before the close work on Dec. 2,” the document read.

Report shows that there has been a wave of sacks and resignations of political appointees in Ivo.

The development was attributed to political rift between Umahi and Sen. Pius Anyim, former Secretary to the Government of the Federation (SGF), who is a major stakeholder in the area following Umahi’s defection to APC from the PDP.

It was recalled that Umahi had in late November sacked the coordinators of Ivo and Echiele Development Centres on alleged dereliction of duty while another of his aide, from the area, Mr Franklin Ukah, resigned his appointment as Special Assistant on Water Resources.