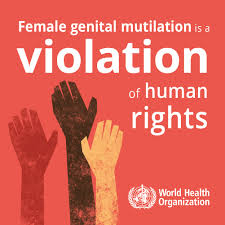 The Wife of Ebonyi Governor, Mrs Rachael Umahi, has inaugurated surveillance teams for the eradication of Female Genital Mutilation (FGM) and all forms of gender-based violence (GBV) in the state.

The inauguration took place on Friday at Onueke, the headquarters of Ezza-South Local Government Area of the state.

Report shows that five communities in the area converged on the council premises, where they resolved and publicly declared their readiness to end the age-long practice.

Inaugurating the teams for the communities, Umahi commended the people for their support and expressed joy over their resolve and collective efforts to end the practice.

Umahi, represented by her Special Assistant on Welfare, Mrs Patience Offorokorie, said available record showed a drop in FGM prevalence in the state from 74.4 percent to 53. 2 percent

“It’s important to note that we are not there yet. The act is being practiced secretly in the state, in spite of the bye-laws and Violence Against Person’s Prohibition (VAPP) Law,” she said.

She said that her pet project,”Family Succor and Upliftment Foundation,” would continue to engage in the fight against FGM and GBV in the state.

She also gave assurance that she would continue to engage the communities to ensure the sustenance of the success so far achieved.

She called on the Chairperson of the coucil, Mrs Chinyere Eze, traditional rulers and community leaders to also join in the fight against the practice.

Eze lauded Umahi’s efforts to eradicate the menace and ensure the preservation of the rights of women and girls in the state.

She thanked the stakeholders for their commitment and contributions during community dialogue.

“During the community dialogue, it was obvious that we are ready to abandon FGM.

“The culture of silence has been broken and women in the area are ready to speak out against any form of abuse of their rights,” Eze said.

She urged the people to sustain their effort until the practice was completely eradicated in the area.

“Today is historic and a turning point for the people as we take a decision regarding what we stand for to abandon the FGM practice,” she said.

A cabinet member of Amaezekwe community, Mr Ezekiel Nwode, who spoke on behalf of the communities, said the public declaration was the outcome of a series of dialogue by the communities.

“We have publicly renounced the practice of FGM and state that anyone caught in the act will be punished according to our community bye-laws and VAPP Act.

“The declaration is made based on completed preliminary processes such as focus group decisions, dialogues and sensitisation on disadvantages of the practice,” Nwode, who is a

Also, Mr Chukwuma Elom, the Coordinator of Umahi’s foundation, said the surveillance team would help to put the activities of perpetrators of the act under check.

The teams were issued declaration certificates and copies of the VAPP Act and bye-law to guide their operation.