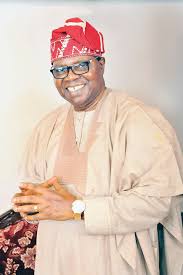 Veteran Juju Musician, Ebenezer Obey has called for the establishment of state police, to provide efficient security and promote peace.

Obey popularly known as “Chief Commander” made the call during a telephone interview with newsmen.

He said the most efficient way of solving Nigeria’s insecurity challenge is to create state police, to compliment the Federal police.

According to him, this is the best way to handle crime and insecurity as Nigeria attains 60 years of independence.

He said that the proximity of the state police to communities especially those with high crime rate would allow for early detection of any emerging crime before it gets escalated.

Security is important in a nation, we should know that God is not happy the way human blood is being shed on a daily basis, the killings are too much.

“We need to create state police across the states of the federation for a peaceful and sane society devoid of crime.

“Each state should have its police, who will monitor happenings at the grassroots, it is the best channel to handle crime, insecurity, insurgency and all,” he said.

Obey urged Nigerians generally to pray for the peace of the nation considering challenges of insecurity, unemployment, crime and corruption.

The musician also said that the Nigerian entertainment industry had witnessed sporadic growth in the last 60 years, as the nation had produced numerous talented and hard-working musicians.

He noted that Nigerian music was now more recognised and celebrated globally.

He commended the efforts of young musicians like 2face Idibia, Davido, Olamide, Wizkid and all for their remarkable contributions to the growth of the industry inspite of challenges of piracy.

“Chief Commander”, however urged the Federal Government to create an enabling environment for the entertainment industry to thrive in subsequent years.

He said measures must be put in place to curb activities of pirates as this had affected the growth of the entertainment industry over the years.

“The Nigerian entertainment industry in the last 60 years has achieved alot, we have produced more talented musicians, our music is known and well celebrated across the globe.

” We only need the government to create an enabling environment for us to grow better, piracy has affected our growth over the years, we also need government to wade into this.

“Piracy has not allowed the full potential of musicians to come to bear, COVID-19 also affected us seriously but we thank God it is subsiding.

” I wish all Nigerians happy 60th anniversary and peaceful years ahead,” he said.

Wizkid to drop “Made In Lagos” album today