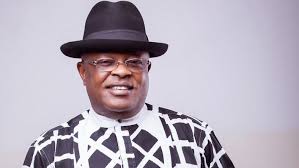 All Progressives Congress (APC), Imo chapter, has congratulated Gov. Dave Umahi of Ebonyi on his defection from the Peoples Democratic Party (PDP) to the APC.

The party congratulated the governor in a statement by its publicity Secretary, Mr. Cajetan Duke, in Owerri on Wednesday.

He said that the defection would serve the collective interest of the people of Ebonyi, the southeast, and Nigeria at large.

The publicity secretary called on other political leaders in the PDP to toe Umahi’s path, to make Nigeria a progressive country.

” Gov. Umahi has demonstrated rare strength of character and political dexterity as an uncommon leader with clarity of vision and tenacity of purpose.

He commended Gov. Hope Uzodinma of Imo for his leadership capacity and disposition which has continued to attract goodwill for the party in the state and the southeast zone.