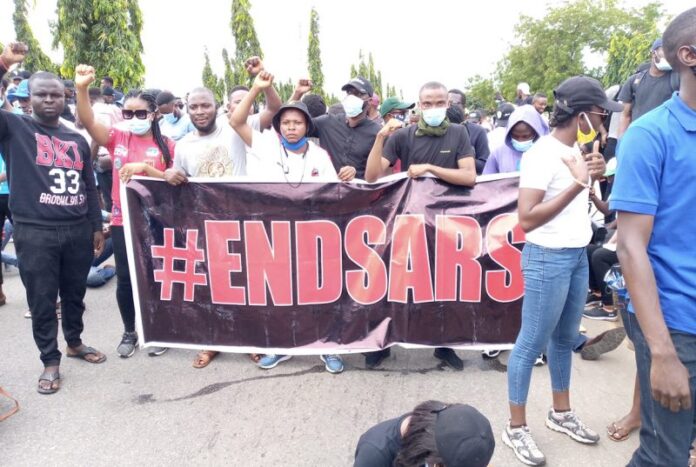 Reports by Nigerian  NewsDirect has  revealed that the death toll of Nigerians who have been killed during the ongoing #EndSARS protests across the country has risen to a total of  11   within five days.

This follows the death of Jimoh Isiak in Ogbomosho, after police officers allegedly shot live rounds at protesters.

The Surulere protester was hit by a bullet when police violently dispersed peaceful demonstrators in the Surulere area of Lagos.Videos on social media show the body laying motionless with medical personnel performing first aid treatment on the victim, but to no avail.

Eyewitnesses report that the man is a mechanic that who went to get a car from a customer at Surulere,  around barracks but got stuck in traffic and came out to see what was happening before been hit by a stray bullet.

The police also arrested some of the protesters during the incident.

The arrested protesters identified as Treasure Chiamaka, Ademola Ojabodu and Felicia Okapara were arrested and beaten to pulp at the venue of the protest held in Surulere axis.

Earlier, President Muhammadu Buhari had while addressing Nigerian youth promised to prosecute officers found to be high-handed in the discharge of their duties.

He admitted that the police had been engaging in extrajudicial activities and killings of innocent Nigerians.

The President said the disbanding of the Special Anti-Robbery Squad unit of the police was the first step in the reformation of the police.

He said, “I use this opportunity to say I am aware (sic) of the recent genuine concerns and agitations by Nigerians about the excessive use of force and in some cases extrajudicial killings and wrongful conduct by men of the Nigeria Police Force.

“The disbanding of SARS is only the first step in our commitment to extensive police reform in order to ensure that the primary duty of the police and other law enforcement agencies remains the protection of lives and livelihoods of our people.

“We will also ensure that all those responsible for misconduct or e unearth and brought to justice.

“We also deeply regret the loss of lives in Oyo State during the recent demonstrations.

“I have directed that the circumstances of his death should be thoroughly investigated.”

“Meanwhile, it is important to recognize that the vast majority of men and women of the police force are hardworking and diligent in performing their duties. The few bad eggs should not be allowed to tarnish the image and reputation of the force.”

At the time of this report, our correspondent has it confirmed that Treasure Chiamaka, Ademola Ojabodu (also known as Ojahbee), and  Felicia Okapara have been released due to the pro bono intervention of Feyikemi Abudu, Moe Odele and a team of other volunteer lawyers.

The protests, which started on Wednesday, have spread to different parts of the country.

Though the initial demand of the demonstrators, which was to scrap the Special Anti-Robbery Squad unit of the police had been met, protesters are insisting on realistic change, not just statements being released by the country’s leaders, also demanding the reform of the police force as a whole resulting in the change of hashtags to #SARSMUSTENDNOW.