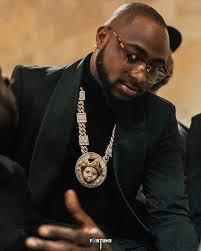 Nigerian star singer David Adeleke also known as Davido, has shown off the image of his son Ifeanyi, which is engraved on his neck piece.

The singer had the jewelry made after the birth of his baby boy, with fiancée Chioma.

The Davido Music World Wide (DMW) label boss has 2 daughters with different women and his son Ifeanyi, is the 3rd, and first son.

He wrote a caption on the photos which read: 001 NG