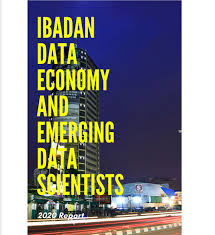 A newly released report has placed the largest city in the South West and the third most populous city in Nigeria, Ibadan as the next city that set to control the data economy in the region.

The report which was released on Monday 28th December 2020 by Infoprations Limited, Lagos, Nigeria is titled “Ibadan Data Economy and Emerging Data Scientists.”

According to the report, it was established “that 98% of the emerging data scientists believe that the city remains one of the cities in the South-West region that would continue to witness massive development in learning and use of data to solve numerous socioeconomic and political problems.”

Importantly, the report canvasses coordination of skills and knowledge management between universities and industries. To effectively do that, “professional courses should be flexible and responsive, and training may need to be industry- approved and accredited.”

In his foreword, Professor Ndubuisi Ekekwe noted: “In our universities and companies, we already know that data is the new oil. That should not end it, as only nations with the modern refineries of data systems would have the capacities to refine data.

“Our data efforts must not mimic the petroleum sector where the multinationals run the upstream leaving the (less lucrative) downstream for us.

“This book – Ibadan Data Economy and Emerging Data Scientists – examines this global redesign within Ibadan (Oyo State, Nigeria) by looking at the fundamental redesign of the economy, which is morphing into a Data Economy. More so, the book looks at how an amalgam of data scientists is seeding that economic transformation.

“The message is evident: data will play a significant role in the advancement of Ibadan, and deepening the capabilities through the productive knowledge base, will be catalytic, not just for the city, but for Nigeria and Africa in general. Indeed, if Ibadan can make sense, and refine the numbers of Nigeria, a new aspirational trajectory would be created, and that can unlock new wealth vistas in the nation.”

Recounting his experience on the project, one of the co-founders of the data consulting company, Mutiu Iyanda Lasisi, says: “We discovered that some of the trained students and corporate learners (at AI Saturdays and Ibadan Artificial Intelligence Meetup Group) are already contributing to the growth and development of private businesses and public establishments in Ibadan.

“For example, CropsCash, an agritech startup company, is connecting farmers and their crops to the end purchasers through artificial intelligence-based software. With the activities of players and artificial intelligence ecosystem, the city is no longer relying on Lagos’ data scientists before issues are solved and needs are catered for in the public and private sectors.”