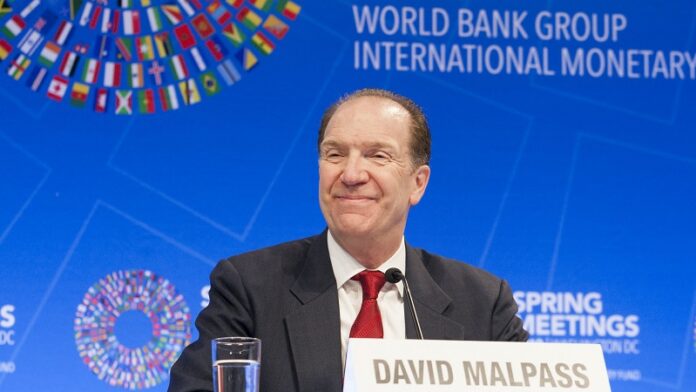 The President, the World Bank Group, Mr David Malpass said in the wake of the COVID-19 pandemic, world leaders needs to redouble their efforts to alleviate poverty and inequality.

Malpass made the call in Washington D. C. on Thursday at a plenary of the ongoing 2020 International Monetary Fund (IMF)/World Bank virtual annual meetings.

According to him, COVID-19 has dealt an unprecedented setback to the global effort to end extreme poverty, raise median incomes and create shared prosperity.

He said that although poverty was growing again, global activity was expected to remain well below its pre-pandemic trend for a prolonged period.

He said that the World Bank’s new poverty projections suggest that by 2021, an additional 110 to 150 million people would have fallen into extreme poverty, living on less than 1.90 dollars per day.

“COVID-19 and its associated economic crisis, compounded by the effects of armed conflict and climate changes are reversing hard-won gains in poverty reduction ending more than two decades of continuous progress.

“Poverty is expected to rise in 2020 for the first time since 1998. It is clear that we face a unique pandemic of inequality; the downturn is broader and deeper and it has hit informal sector workers and the poor, especially women and children the hardest.”

Malpass said that world leaders also needed to take note of the loss of human capital and what could be done to restore it.

He said that before the pandemic, developing countries were making significant progress and notably were starting to close gender gaps.

He, however, said that the trend had somewhat reversed because due to the outbreak, more than 1.6 billion children in developing countries had been out of school, implying a potential loss of as much as 10 trillion dollars in lifetime earnings for those students.

He said that gender-based violence was on the rise, while child mortality rates were also likely to rise significantly.

“These setbacks imply a long-term hit to productivity, income growth and social cohesion, which is why we are doing everything we can to bolster health and education in developing countries.

“In the area of health, we established a fast-track COVID response that has delivered emergency support to 111 countries so far.

“Most projects are now in advanced stages of disbursement for the purchase of masks, emergency-room equipment, and other COVID-related supplies.

“We are also helping developing countries with COVID vaccines and therapeutics and we plan to make available up to 12 billion dollars to countries for the purchase and deployment of COVID-19 vaccines.”

Malpass said that in the area of education, the bank was helping countries reopen primary and secondary schools safely and quickly.

He said the organisation was working in 65 countries to implement remote-learning strategies, combining online resources with radio, television and social networks and printed materials for the most vulnerable.

He said that the Bank and its partners needed to help the poorest countries permanently reduce their debt burdens and attract effective investment, a situation which would require much greater debt and investment transparency.

He said that a combination of factors had led to excessive debt in countries where there were no margins for error.

“At the Spring Meetings this year, I proposed, along with IMF Managing Director, Kristalina Georgieva that G20 official bilateral creditors suspend collection of debt-service payments from the poorest countries.

“The G20 and Paris Club endorsed this approach, which took effect on May 1. As of early October, 44 countries were benefiting from an estimated five billion dollars in debt service relief. “However, much more needs to be done. We have called on the G20 to extend the debt relief through the end of 2021.

“It is critical that countries work toward their climate and environmental goals. Amid the pandemic, the World Bank Group has remained the largest multilateral financier of climate action.

“Over the last five years, we provided 83 billion dollars in climate-related investments.”

The 2020 Annual Meetings of the IMF and the World Bank Group holding in Washington D. C. began on Oct. 12 and will end on Oct. 16.