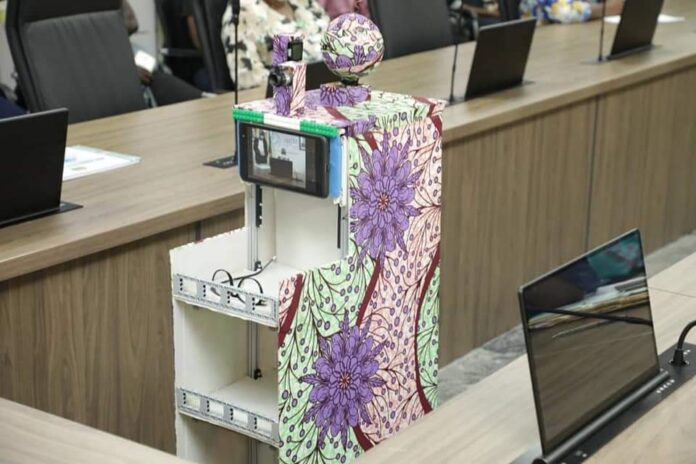 An Abuja-based secondary school, Glisten International Academy, has developed an indigenous mobile robot ‘Mairabot’ that can interface between doctors and patients to reduce COVID-19 infection.

The students of the academy, while presenting the robot at the National Information Technology Development Agency (NITDA) on Wednesday in Abuja, said the robot will help reduce the rate of COVID-19 infection from patients to medical personnel.

The Executive Director of the Academy, Mr. Abba Saidu, who led the team to NITDA, said the students prior to COVID-19 era, had different projects they were working on, adding that it was easy for them to delve into developing the robot inline with the pandemic’s realities.

“This robot is created to reduce the  physical contact between medical personnel and infected persons and this will in return, reduce drastically, the number of medical personnel that will be infected in the process of carrying out their duties.

“The robot can run for four hours and its functions include, taking of temperature, delivering of drugs to patients.

“Innovative measures were put in place to checkmate the development process of the project, to ensure it meets international standards and also improve its performance level to cover other aspects of human life,” Saidu said.

The executive director said the robot was developed by 30 students that made their contributions via an online platform.

He also said that the robot could function in the country because the components were locally sourced.

NITDA Director General, Mr Kashifu Inuwa, in his remarks,commended the academy for such an innovation, while pledging to support entities with innovative ideas to address the nation’s challenges.

Inuwa enjoined the students to see future in digital skills, as it was the sustainable way for a consolidated digital era.

He, however, directed the Office for ICT Innovation and Entrepreneurship,a subsidiary of the agency to ensure that the project and the inventors enjoyed necessary visibility in order to promote their idea for commercialisation.

The students, teachers of the school were also equipped with some digital tools which consisted of seven iPads, a laptop,other internet facilities to aid their further ideation.

Fight against insurgency: NAF Graduated another set Of 6 Pilots In tactical, basic flying

Fight against insurgency: NAF Graduated another set Of 6 Pilots In tactical, basic flying