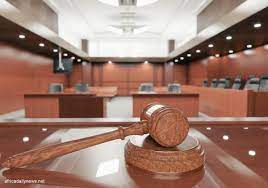 An Ota Magistrates’ Court in Ogun, on Friday, sentenced a 45-year-old man, Sunday Ifaniyi, to 11 months imprisonment for burglary and theft of a laptop, jewellery and other valuable items.

In her ruling, the Magistrate, Mrs A.O. Adeyemi, sentenced Ifaniyi to eleven months imprisonment with an option of N10,000 fine.

At the trial, the Prosecutor, Insp E.O. Adaraloye, had told the court that the convict and others still at large, committed the offences of conspiracy, breaking in and stealing on Nov 20.

Adaraloye said that the convict and his accomplices conspired and broke into the house of the complainant, Funmilayo Benson, at 6.10 a.m., at No. 6, School Avenue, Off Osuke Road, Iyana-Iyesi, Ota. Ogun.

The prosecutor said that the convict and his accomplices stole jewellery, laptop, wrist watch and other items, the value of which is yet to be ascertained.

He said that luck, however, ran out on the convict, who was caught by members of a vigilante group, and handed over to the police.

The prosecutor said that the offences contravened Sections 411,451 and 516 of the Criminal Code, Vol.1, Laws of Ogun.