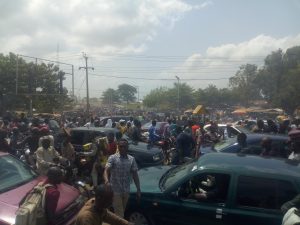 There as confusion in most parts of Gwagwalada area in the FCT on Monday when youths broke into a warehouse near the Area Council Secretariat and looted food items.

A correspondent who was at the scene, reports that the youths packed bags of rice, millet, cartons of noodles, among other items.

It was also reported that the number of the looters kept multiplying as information reached other residents, with some bringing vehicles to convey their loot.

The situation also led to serious traffic gridlock as the looters took over most major routes to escape with their booty.

Mr Jacob Simon, a resident, who admitted taking two bags of rice and a carton of noodles, told the newsmen that it would take three days to empty the warehouse.

“The warehouse is filled with COVID-19 palliatives. I will take the two bags to the house and come for more,” he said.

Another resident, Reuben Ilya, however said he would not return for fear of being trampled upon.

“You can see the stampede. It is not easy. This is a tough job,” he said.

Unconfirmed sources claimed that some of the youths were injured in the stampede as the looters moved in a frenzy to pack as much as they could.

It was also reported that the few security operatives around the scene made no effort to stop the looters, opting to allow them to operate unhindered.