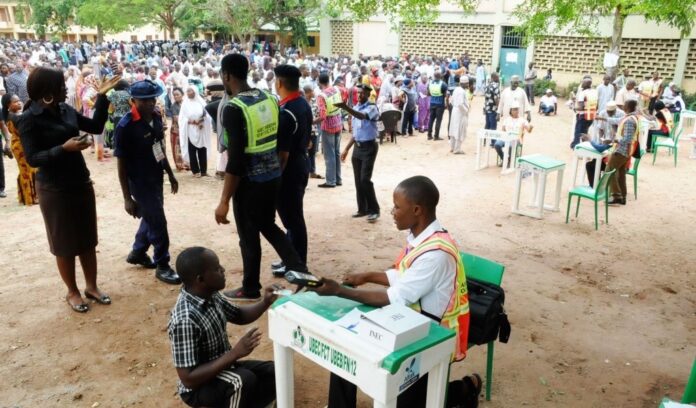 The ongoing campaigns for the Sept. 19 Edo governorship election are characterised by violence and hate speech. No one is claiming responsibility. However, political observers say that almost all the political gladiators are guilty.

Barely a month to the election, the fear of possible violence is palpable.

Political pundits are predicting all manners of outcomes, before and after the election.

The signs of violence were first noticed at the launch of the PDP mega rally in Benin City, a few weeks ago, that had in attendance many of the PDP governors, led by Gov. Nysome Wike of Rivers.

The team had paid a courtesy visit to the Oba of Benin, Oba Ewuare II, in his palace.

Before you could say Jack Robinson,  political thugs had gathered at the entrance of Oba Palace, chanting all kinds of hate speech, name calling and booed Gov. Godwin Obaseki and his entourage.

Few of the thugs were arrested by security operatives. Nothing has been heard since then.

The blame game continued as both the PDP and APC claimed ignorance and disowned the thugs. But people are still asking, “ who are the sponsors?”

Some few suspects were said to have been arrested by the police, but their identities were not disclosed nor have they been prosecuted.

Obaseki has constantly preached peace, he had appealed to voters and his supporters to avoid violence or any action likely to breach public peace. He also called on the security operatives to ‘do the needful.’

In the same vein, the APC candidate, Pastor Osagie Ize-Iyamu, also stressed the need for peace, when he visited Abuja to address the media on the political developments in Edo.

He suggested that security operatives should unmask the sponsors of violence and promoters of hate speech during campaigns and that it should be the best approach to address “this ugly development.”

“Our security operatives should be more proactive and adopt the ‘name and shame’ method.’’

He also told the media that he was surprised that security operatives had continued to hide behind one finger in curtailing violence thereby fuelling a re-enforcement.

“We believe that security operatives can do more, show the faces of those arrested and their sponsors as a form of deterrent.

“They should make everything bare, like the case of the incident that took place at the Oba Palace, which is now a shame to all Edo people.

“Politics is not a do-die affair; it’s only the electorate that should be allowed to decide.

“All that is needed is to appeal to them to vote for you and your party with the ‘SIMPLE Agenda’ like mine.

“Not until we unmask faces behind violence, we will only be scratching the surface,” he said.

He appealed to fellow contestants to reduce issues that promote violence and thuggery at rallies and discuss issue-based matters and development of the state.

Also, the incumbent Gov. Obaseki’s thoughts are not different. He regularly condemned violence at the beginning, except recently that he started saying “fire for fire.”

Echoes from the ongoing campaigns from both the PDP and APC across the 18 local government areas “are not sweet to the ears.’’

Critics and political watchers say Edo is a volatile area that should be watched, “it’s like a time bomb waiting to explode.’’

INEC, the political umpire, last week, alluded to this, when it said that the state governor has powers to declare a State of Emergency in the state if the situation persists.

Critics say violence and hate speech are twin brothers dominating the current campaigns in Edo, one providing the fuel for the other to execute.

Dr. Kingsley Oboh, a social critic and a political scientist says Nigeria’s brand of politics is embedded with hate speech, a case of “trying to make an omelette without breaking eggs.’’

According to him, let’s call a spade a spade, the blame squarely rests on the political umpire, security operatives and the political gladiators.

“What the contestants say at rallies speak volumes, loaded with hate speech and slander.

“Most of them do not address issues of development.

“Until politicians are redirected to issue-based campaigns, hate speech and political violence will continue to rule Nigerian politics.’’

Oboh says there are reports of incidences of shooting and discovery of cache of arms in some parts of the state, adding that “arms and ammunition are needed in Sambisa forest to fight Boko Haram insurgency not in Edo politics.

“What the politicians need to do is to appeal to the conscience of the electorate, beg for their votes and present to them your agenda and tell them what you can do differently.

“You don’t need to shoot at them as in the case of the Igueben community incident, or intimidate people by any form of violence.

“The leadership of the security operatives should do the needful and take charge and be fair to all the political parties.’’

The Oba of Benin has also cautioned the major political parties to restrain their supporters from causing trouble in the state, adding that the Palace should not be dragged into politics, as he remains father to all.

He warned politicians to play by the rules, and not to turn any part of the state to a theatre of war for selfish interests.

Commenting on the happenings in  Edo politics, Oboh says both the politicians, political umpires like INEC and security operatives, have learnt nothing and forgotten all, the people remain the oppressed mentally and emotionally.

“The peace and the tranquillity of the environment are again being troubled by people with selfish political ambition.”

As suggested by stakeholders, all hands must be on deck before and after the Sept. 19 governorship election, to check any infraction that may cause upheaval in Edo.