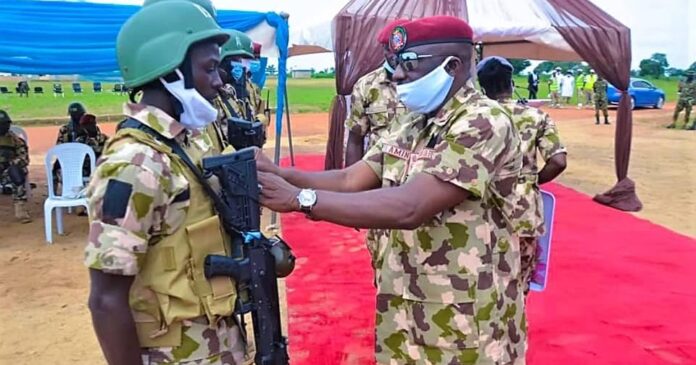 In furtherance of its continued efforts at building comprehensive capacity to more effectively and efficiently deal with the security challenges confronting the Nation, the Nigerian Air Force (NAF), today, 18 September 2020, graduated another batch of rappellers and inaugurated Special Forces (SF) induction training for a new set of 219 trainees, comprising 14 officers and 205 airmen/airwomen, at the Regiment Training Centre Annex (RTCA), Bauchi. Today’s event also featured the commissioning of a furnished Block of 10x  single-bedroom flats for personnel to enhance their welfare and motivate them to contribute significantly to the accomplishment of the NAF’s assigned tasks.

Speaking during the inauguration of the SF Course 7/2020 and graduation of 24 personnel of the Intermediate Rappelling Course (IRC) 7/2020, the Chief of the Air Staff (CAS), Air Marshal Sadique Abubakar, who was represented by the Air Officer Commanding (AOC), Ground Training Command (GTC), Air Vice Marshal Idi Amin, charged the new SF trainees to imbibe the attributes of NAF SF operatives, which include; honesty, courage, perseverance and adaptability. While congratulating the graduands of IRC 7/2020, the CAS reiterated that, the NAF would continue to strive to meet the expectations of the Country, by protecting the citizenry and discharging its constitutional responsibilities to the Nation. He noted that, the task of nation building was a collective responsibility, especially with the dynamics of the current security challenges facing the Country.

“As part of the Armed Forces of Nigeria, the NAF is constitutionally obligated to protect lives and properties of Nigerians so that they can go about their legitimate businesses unhindered,” he added.

The CAS stated further that the NAF, in synergy with sister Services and other security agencies, had recorded significant successes in the fight against insurgency in the North East as well as against banditry, kidnapping and cattle rustling in the North West and North Central parts of the Country. He disclosed that, in order to consolidate the gains made so far, the Service recently activated the 203 Combat Reconnaissance Group, (203 CRG), Gombe for enhanced capability in providing timely and actionable intelligence to contain insecurity. He added that the training of selected Regiment personnel as SF elements had become even more crucial in line with the practice of modern air forces around the world, which now deploy specially-trained ground forces to provide situational awareness for aircrew, thereby reducing collateral damage and enhancing the safe conduct of air operations. This, according to him, was one of the reasons for the establishment of the Special Operations Command (SOC), with Headquarters in Bauchi, as well as the Quick Response Groups/Wings in Gusau, Owerri, Ipetu-Ijesa, Katsina, Birnin-Gwari, Gembu, Agatu and Lafia, amongst others. He therefore expressed appreciation to the Commander-in-Chief of the Armed Forces of Nigeria, President Muhammadu Buhari, for the immense support that had enabled the NAF to achieve its operational, logistics and training goals.

Earlier in his welcome address, the Commandant RTCA Bauchi, Squadron Leader James Jantiku, thanked the CAS for his unwavering support for training activities in RTCA especially, for the recent construction of a 23-Apparatus Special Forces Obstacle Course, Rappelling Tower and Regiment Training Pool to further boost training activities. He stated that, the objective of the courses was to equip the SF elements with the necessary skills, tactics and procedures required to function effectively as operatives in NAF SF Units.

The event, which had in attendance Principal Staff Officers from SOC and GTC, Commandant Military Training Centre Kaduna as well as Commanders and senior officers of military units and heads of paramilitary organizations in Bauchi, ended with a live shooting exercise for the dignitaries.