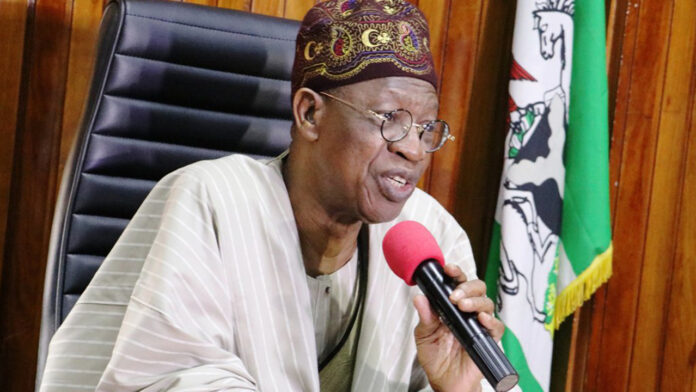 The Federal Government has said the call, in some quarters, for the resignation of President Muhammadu Buhari over the recent killing of farmers in Borno State by Boko Haram terrorists is “cheap and irresponsible’’.

The Minister of Information and Culture, Alhaji Lai Mohammed, during a meeting with members of the Newspaper Proprietors’ Association of Nigeria (NPAN) on Thursday in Lagos said the calls amounted to playing dirty politics with the issue of security.

Our Correspondent reports the meeting was attended by the President of NPAN and Publisher of “This Day’’ Newspaper, Nduka Obaigbena, veteran Journalist and former Governor of Ogun state, Chief Olusegun Osoba and founder/ publisher of “The Vanguard’’ Newspaper, Sam Amuka-Pemu.

The General Secretary of NPAN and Publisher of “The Source” Magazine, Comfort Obi, Publisher of Nigerian Pilot, Dennis Sami, Publisher Nigerian NewsDirect Dr Samuel Ibiyemi as well as representatives of “The Sun’’, “The Nation’’, “Daily Trust’’ and “Daily Asset’’ Newspapers, among others attended the meeting/

The minister said: “In the wake of the killing, there have been calls in some quarters for Mr President to resign.

“Well, let me say here that this call amounts to playing dirty politics with the issue of security, and it is cheap and irresponsible

“No amount of hysterical calls for resignation will prevent him from serving out his term’’.

Mohammed said before the President assumed office, Boko Haram could stroll into any city,

especially in the north, to carry out deadly attacks.

He said suicide bombers used to have a field day detonating their bombs and killing innocent people and Boko Haram used to occupy territory, deposing and installing Emirs and collecting taxes.

He said all that had become things of past and the changes were not mere happenstance, but part of the successes recorded by the military, under President Buhari

“Therefore, calling on the President to resign every time there is a setback in the war on terror is a needless distraction and cheap politicking.

“Let us stop playing politics with the issue of security,’’ he said.

The minister reiterated the position that “Boko Haram is today badly degraded and can only carry out cowardly attacks like the one against defenseless farmers over the weekend’’.

He said no nation, no matter how powerful, is immune to attacks on soft targets.

“For instance, 9-11 happened despite the prowess of the most powerful army in the world.

“Boko Haram’s only oxygen today is publicity. That’s why they have rushed to release a video claiming responsibility for the killing of the farmers.

“Please note that that video was shared to instill fear in the civil populace and maintain relevance in the eyes of their sponsors,’’ he said.

Mohammed stressed that the killing of defenseless farmers was an act of cowardice and savagery by a group of deranged terrorists.

He added that the killing is not a true reflection of the progress being made by the military against Boko Haram.

“That Boko Haram is going after soft targets is a sign of weakness and desperation on their part, especially after they have suffered huge setbacks in the hands of the military in recent times.

“The modus operandi of a losing terror group, is to go after soft targets in order to stay relevant.  The minister appealed to the general public to provide information about the insurgents to security forces to assist them in ending the war on terror,’’ he said.

He also urged Nigerians to continue to support the men and women in uniform among whom many had made the supreme sacrifice to keep the nation safe.

Responding on behalf of other members of association, Obaigbena thanked the minister for the visit noting, that “it is an unusual time for the country as Nigeria is in crisis of insecurity across the country’’.

He noted that it is not time for blame game or politics but how to collectively find solutions to the security situation.

Obaigbena assured that the media would work with the minister and the government at large to deal with the situation.

Our Correspondent reports the meeting went into closed door session after the opening speeches by the minister and NPAN President.

In the entourage of the minister to the meeting are the Executive Secretary of Nigeria Press Council, Mr Francis Nwosu, the Registrar and CEO of Advertising Practitioners Council of Nigeria, Dr Olalekan Fadolapo.