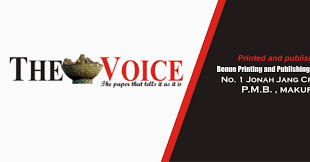 The management of Benue Printing and  Publishing Corporation, publisher of “The Voice Newspaper,” on Sunday, announced minor changes in the editorial team of the government owned Newspapers in the state.

In  the changes as announced  by the General Manager of the corperation, Mr. Ben Anangde,  which according to him, take immediate effect has  Mr. Amenger Igbur,  formerly the  Political Editor  as now Assistant General Manager, AGM,  Operations, with Mr. James Shim, who was the News Editor been moved to the Politics Desk as Editor.

Also affected by the changes are;  Mr. Damian Daga, who was before now Editor, Weekend Express was made the  News Editor of the paper.

Mr. Moses Akarhaan, formerly a sub-editor was made the features Editor.

In a statement signed by Mr. Agande and made available to Nigerian NewDirect  on Sunday in Makurdi, explained  that the changes were  part of the on going reorganisation at The Voice newspaper to reposition the paper for ultimum performance and greatness.

He further stated that since assumption of office in February 2020, he had introduced some changes including making the state owned tabloid having a robust online presence.