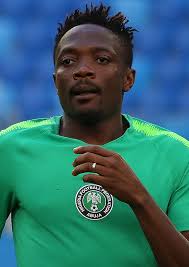 Super Eagles Captain, Ahmed Musa says the team will ensure that CAF’s restriction of not allowing spectators at match venues for AFCON 2021 Qualifiers, did not affect their play to win, as they file out against the Leone stars of Sierra Leone at the Samuel Ogbemudia statidum in Benin.

Speaking at a pre match conference ahead of Friday’s clash, Musa said:” It is something we all would have liked, to play before a big home crowd, unfortunately, the COVID-19 pandemic protocol will not allow fans to come into the stadium. But they should not worry because most of us are already used to playing in our clubs without fans and are used to it”.

He added:” We will play as a team knowing that our supporters are out there with us in spirit.

“As for concern over my fitness, I am very fit and ready for the game.  I have been training with my last team until I left two weeks ago.”