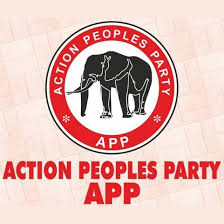 Over  20,000 registered members of the Action Peoples Party, APP, State Working Committee, SWC, all Local Government and Ward executives of the party have decamped to the Peoples Democratic Party, PDP in Ebonyi State.

Addressing a press conference in Abakaliki, the immediate past Chairman of the APP, Engr. Joshua Chinedum Elekwachi stated that his decision to join the fold of the PDP was “borne out of the fact that the Party is unarguably the only political party that truly resonates with the masses, not only in Ebonyi State, but also across the country.”

According to him, “I am joining PDP to team up and work with the good people of Ebonyi State to retrieve the State from the hands of a very few merchantilist politicians who have personalized governance and impoverished the people of the State for years now.”

The former Chairman of the Forum of APP Chairmen in the 36 states of the country including FCT, Abuja, berated the APC-led Federal Government for being insensitive to the plight of Nigerians.

He stressed that the APC has failed Nigerians, following its inability to revamp the economy for the benefit of the people.

He said: “I am moving to the PDP together with all the members of the State Working Committee, SWC, of APP, all local government and Ward executives and over 20,000 registered members of the party in the State.

“In the last 5 years a lot has happened in Ebonyi which made the majority of Ebonyi people to feel highly disenchanted, neglected and sidelined but the time has come, as it pleases the Lord, to remember his people and give them a new song of victory.

“To this end, it behoves on all true sons and daughters of Ebonyi to come together and work together under one umbrella to rescue and return the State to the path of genuine peace, unity and prosperity for all.”