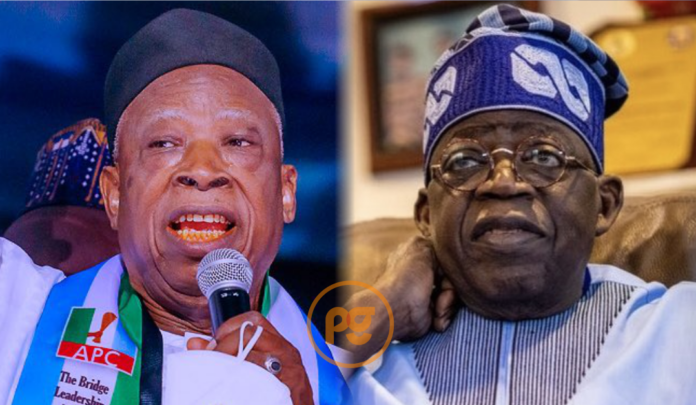 An indication has emerged of a brewing crisis in the ruling All Progressives Congress (APC) as the party’s National Working Committee has kicked against the composition of a 422-member Presidential Campaign Council for the 2023 polls.

The National Working Committee (NWC) led by the National Chairman, Sen. Abdullahi Adamu has fired a letter to its Presidential Candidate, Asiwaju Bola Ahmed Tinubu, for allegedly breaching the agreement he reached with the NWC on the composition of the Council.

Accusing Tinubu over running a one-man show, the chairman said collaboration was key to winning elections and not alienation.

Persecondnews gathered that Adamu’s NWC had made some recommendations to Tinubu prior to the composition and announcement of the Campaign Council.

The letter sent to Tinubu, who has travelled out of the country with his running mate, ex-Borno Gov. Kashim Shettima, reads:

“On behalf of the National Working Committee (NWC) of the All Progressives Congress (APC), I present my compliments to Your Excellency, and have the honour to convey to you, in truth and respect, the Committee’s opinion and position, regarding the above-mentioned subject matter, with a view to having a clear understanding about the respective roles and responsibilities of the principal organs of the Party charged with the duties of conducting the campaigns in the forth-coming general elections.

“This correspondence has become necessary in view of developments that took place over the last few days around the purported appointments into the Presidential Campaign Council (PCC) that was announced precipitately by officials of the Council, without making recourse to the NWC for approval.

“All along, the NWC had been disposed towards the campaign in a cooperative spirit that is driven by the overall interest of the Party and the singular desire of victory for our candidates, in the persons of your esteemed self and your running mate.

“It is against this background that the NWC received with astonishment and regret, the press release by the PCC on 23rd September 2022, in which a purported list of appointees was announced, which effectively served as the approved roster of participants in the Party’s Presidential Campaign Council.

“The purported list not only came as a complete surprise to the NWC and the Party’s leadership, but also contravened the principles and purposes of the arrangements that you and I had led towards the adoption of the Organogram of the PCC, and its principal officials.

“Perhaps it has become necessary owing to the passage of time, that I should draw Your Excellency’s attention to the agreements that we reached in principle around the final adoption of the PCC list, based on the understanding that it was a work in progress, until such a time that the Joint NWC/PCC Committee that was established to formalise the structure and populate the list, submits its report.

“Your Excellency will no doubt recall our meetings in my office and also at the NWC Conference Room at the Party’s National Secretariat, on Wednesday, 7th September 2022, during which we discussed the details of the Organogram of the PCC and its composition, as a collaborative project between the two entities.

“Our recollection of those meetings clearly leaves us in no doubt that a breach of agreement has occurred, and that a return to the principles of cooperation and respect for each other is required