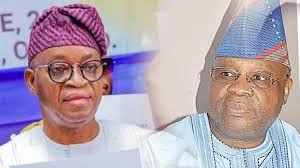 Having read the cacophonic legal diatribes and jargon woven together in the lengthy but worthless write-up which is typical of its author, it can not be an overstatement to classify it as a mere academic exercise designed to misinform the unsuspecting members of the public on the ongoing governorship election matter between Governor Gboyega Oyetola and Senator Ademola Adeleke at the state election petition tribunal.

It however, would not be out of tune to classify the write-up that appeals to sentiments and emotions as unreliable which is coming out from an alcohol-soaked mind that could not be legally held responsible for both his actions and inactions but a mere success in the display of absolute nuisance value.

It is a pity that a supposed experienced learned man could, for whatever reason, frivolously and deliberately engage in the use of subterfuge and skullduggery to behave as if he would be sitting in judgement at the tribunal.

Enough of this engagement of the use of legal chicanery and artifice while hiding under the legal profession to arrogate to yourself the qualities that are alien to you.

Why dabbling unnecessarily into an issue before the tribunal instead of giving the court a deserved time and latitude to be focused and work dispassionately with a view to thoroughly perusing, studying and verifying the documents submitted to it by both the applicants and the respondents?

Thank God that the Osun PDP super and plenipotentiary lawyer stated in his general use of harangue that he was leaving all the decisions on the election petition to the tribunal which is a submission that succeeded in consigning his pungently tilted and biased analysis into the thrash can of opinions.

It was however, observedly nauseating and irritating to read Barr Hashim Abioye who said that he has left the petition matter to the tribunal as if he has another choice within the legal framework under the Constitution of The Federal Republic of Nigeria as enshrined in the 2022 Electoral Law as amended.

The ever-loquacious Osun PDP attorney should be told point blank that it would be worthwhile for him to devise other means of unduly impressing the Pathfinder faction of his party and particularly his sponsor from the land of the sword of fire.

In order not to fall victim of being subjudicial, the honourable expectation from any legal practitioner who is glaringly worth his salt is to allow the temple of justice to do its work without any iota of interference and to always have it in mind that sentiment and justice are in no way related.

For the umpteenth time, Barr Abioye should henceforth cease from unnecessarily exhuming and displaying professional arrogance with impunity with reference to the subsisting legal schism on the Osun governorship election that is currently before the tribunal.
In peace I come.
————————–
*OLABISI is the Media Adviser to the Osun State APC Chairman.*