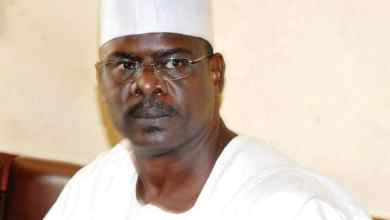 The Federal High Court in Abuja has ordered that the Senator representing Borno South, Ali Ndume should be remanded at the Correctional Center, following his inability to produce the former Chairman of the defunct Pension Reform Task Team, Abdulrasheed Maina, whom he stood surety for.

Maina is answering to a 12-count money laundering charge the Economic and Financial Crimes Commission, EFCC, preferred against him and a firm, common input Properties & investment Limited.

EFCC alleged that he used account of the firm and laundered funds to the tune of about N2 billion, part of which he used to acquire landed properties in Abuja.

Maina spent over seven months on remand at the Kuje Correctional Center before the court released on bail on July 24, after Senator Ndume agreed to stand surety for him.

He had since September 29, refused to appear before the court for continuation of his trial.

In his ruling on Monday, trial Justice Okon Abang stressed that Ndume had in an affidavit of means, he deposed to on May 5, agreed to pay the N500m bail on Maina’s head, should he Defendant jump bail.

The court stressed that it had on four separate dates, afforded Ndume the opportunity to show cause why he should not be remanded in custody or made to forfeit the bail sum to the Federal Government, owing to the continued absence of the Defendant.

Justice Abang noted that though Ndume had on November 18, pleaded for an adjournment to enable him to file necessary processes to defend himself, he failed to do so.

According to the judge, instead of filing processes, Ndume, wrote a letter to the Deputy Chief Registrar of the Court, requesting seven documents that included the entire record of proceedings in the matter.

The court held that EFCC’s application for Ndume to be remanded in custody and for him to forfeit the bail bond succeeded.

Consequently, relying on section 179 of the Administrative of the Criminal Justice Act, 2015, the court ordered that Ndume should bended at the Kuje Correctional Center, pending when he forfeits the N500m bail sum to FG as he agreed to do in his affidavit.

Alternatively, the court directed FG to sell a property situated at plot 158 Cadastral Zone AO2, Asokoro, which belongs to Ndume.

It said the property should be sold for the bail sum, with full payment made into the federation account.   The Court said the third alternative was for Ndume to produce Maina in court for the continuation of his trial.

Justice Abang ordered that Ndume should remain in detention, pending the fulfillment of any of the conditions. The matter was subsequently adjourned till Tuesday for maina’s trial to continue in his absence.

The Court had on the last adjourned date, issued a bench warrant for security agencies to arrest Maina anywhere he is found.

Meanwhile, immediately after the Court proceeding Senator Ndume, was led out of the court by officials of  the Nigerian Correctional Service.