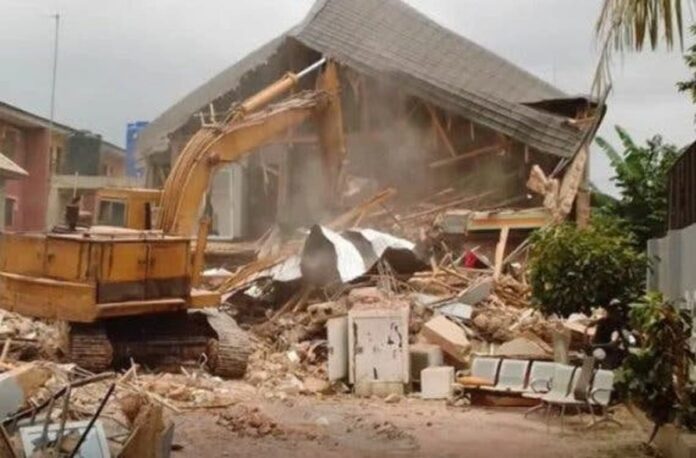 Sequel to the partial demolition carried out by the Development Control an agency under the Federal Capital Territory Administration(FCTA), at the Wuse 2 plaza in Abuja on Monday.

However, FCTA refuted the claims, insisted that the shops are illegal constructed hence the enforcement.

Some shop owners who witnessed the attempted demolition and almost had their stalls affected lamented about the step taken by the Development control.

In the video that went viral on social media, during the attempted partial demolition, a voice was heard crying and pleading that the demolition be halted at least allow the occupants evacuate the building.

Nigerian NewsDirect Newspaper spoke to an eye witness who also manages one of the shops at the plaza about the demolition.

According to one eyewitness, Ohida Abdulrazak, he said bystanders were surprised at the approach of enforcement by the men of FCTA.

NewsDirect correspondent who was on ground to assess the situation spoke to the woman, Ronke Oyekale, the shop owner seen screaming at the background of the video that circulated in the social media she noted that she was unaware of the demolition until she was alerted by noises and had to go downstairs to intervene.

NewsDirect gathered from the management of the FCTA that the ground floor of the plaza was originally meant to be a car park, but the owners illegally converted it to shops.

According to Development Control, they had earlier served them notice since June this year to revert to the original building plan but the people allegedly refused to revert, hence the partial demolition to enforce the law by breaking the glasses,  so that those shops can be reverted to car park as  was approved in the plan.