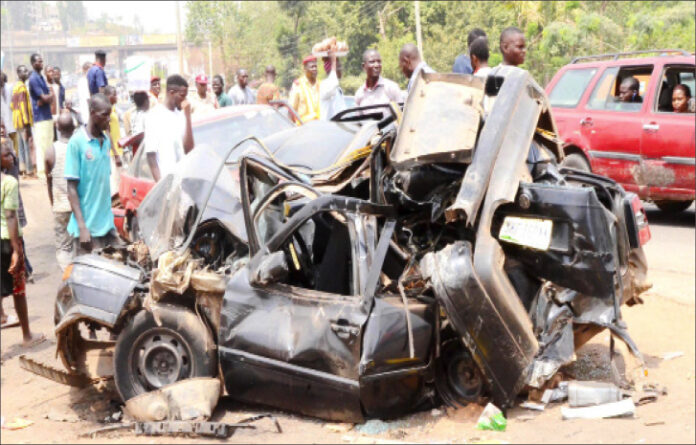 Five vehicles were badly damaged in an accident that occurred during the week at about 1pm along National Mosque road in the Central Business Area in Abuja.

Nigerian NewsDirect learnt that the accident occurred as a result of recklessness of the drivers and non compliance with the traffic rules and regulations.

The Federal Road Safety Corps, FRSC has on several occasions warned that motorists should not disobey traffic rule and regulation as many road crashes happened due to non compliance to these rules.

An eye witness confirmed to our reporter that one of the drivers sustained serious injuries and was rushed to the hospital by the personnel of the FRSC for treatment.

Speaking to the traffic warder present during the accident, he lamented that most drivers beat traffic and each time such it happened like that, it result to fatal accident and multiple crashes.

One of the drivers of the vehicles that were involved in the accident, who was accused of causing the accident explained that, he was the last person to be passed by the traffic warder, saying that in the process of trying to go, the traffic warder signal the other vehicles and there was no way he could stop and this led to collision.

However, no life was lost in the accident except one of the driver that was badly injured and was taken to the hospital for medical attention.

The matter has been taken to the Wuse police station for further investigation and to ascertain the real cause of the accident.