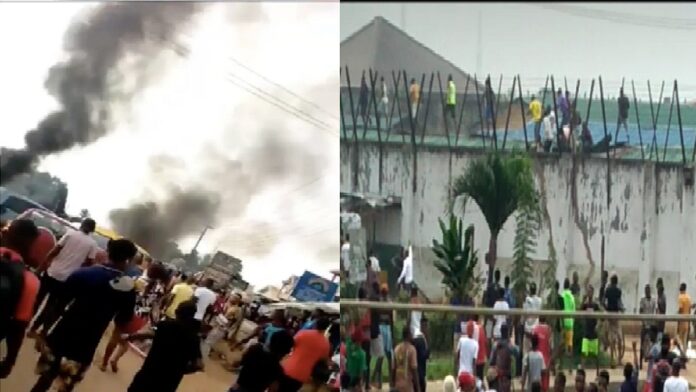 …Youths have the right to protest  — Buhari

Armed thugs disrupted  protests againstpolice brutality near the Central Bank of Nigeria in Abuja by attacking demonstrators and burning their  vehicles.

It was gathered that the police surrounded the protesters around 1:00am on Monday in an attempt to disperse them but were resisted. Shortly after that period, the hoodlums stormed the venue of the protest  and descended on the demonstrators.

A truck belonging to the Disc Jockey, who had been playing music to the crowd was set ablaze by the thugs. It was also gathered that the attackers shot at the protesters, injuring many of them in the process.

Also other suspected hoodlums  set ablaze some vehicles believed to be owned by protesters at Kabusa Junction in the Federal Capital Territory, Abuja.

In a tweet, the Feminist Coalition said the thugs were sent to incite violence to discredit the ongoing protest.

“The cars of peaceful protesters have allegedly been set on fire in Abuja by these thugs that continue to disrupt and incite violence.

“Abuja protesters please head to safety! Your lives matter and should not be dispensable due to political games,” the tweet reads.

It was alleged that the hoodlums arrived Apo, Lokogoma areas of the Abuja with sticks, machetes and local guns, and are causing mayhem.

In the meantime, armed policemen had been deployed to guide the CBN building. Despite the attack on them, the demonstrators have vowed to return to the place and continue with their protest.

Following threat of alleged fear of attack by hoodlums disguising as EndSARS, Police have deserted checkpoints located on roads between Lagos and Ibadan, Lagos-Abeokuta expreway;Shagamu-Ore,Ibadan-Akure road,Ibadan-Oshogbo and Ife-Akure road among others

Similarly in Edo State, the government has declared curfew following jailbreak by suspected hoodlums during the EndSARS protest march in Benin City

Our Correspondent gathered that hoodlums  broke into the Benin Correctional Centre and freed some inmates in one of the cells.

It was gathered that the hoodlums, numbering over 100, broke open one of the cells and freed several inmates in the process. Several persons sustained gunshot injuries as an armed squad of prison officials engaged the suspected hoodlums in a gun duel.

The hoodlums also destroyed and vandalised some sections of the High Court  premises located few meters beside the prison.

They had earlier gathered along Sapele Road beside the prison as early as 7 a.m., setting bonfires and sending back road users particularly motorists. The hoodlums launched the attack moments their number increased considerably.

They broke part of the high wall while some climbed the fence into the prison yard. A few of the inmates escaped with gunshots while an elderly man was recaptured while walking away like a passer-by.

The situation made the State government to  impose a 24-hour curfew across the state until further notice. According to a statement by Osarodion Ogie, the Secretary to the State Government, the curfew is to take effect from 4 pm, October 19, 2020. It stated, “This decision has become necessary because of the very disturbing incidents of vandalism and attacks on private individuals and institutions by hoodlums in the guise of #ENDSARS protesters.

“While the government of Edo State respects the rights of its citizens to undertake legitimate protests, it cannot sit idly when hoodlums have taken laws into their hands to cause mayhem on innocent citizens and the state.

“By the directive, schools and businesses are to shut down activities accordingly. Those who cannot move safely are to stay put between now and 4 pm till calmness is restored.

“Parents are advised to rein in their children, youths, and wards, to forestall further breakdown of law and order. The responsibility of government is to protect lives and property and maintain law and order, therefore, anyone found outside in violation of the curfew would be dealt with according to the law.”

The EndSARS protesters early Monday morning took residents of Benin City and other towns by storm as they set bonfires and blockades along major highways and streets. Motorists found it impossible to pass through the spots on the roads due to the intensity of the bonfires with tyres with huge balls of fire while benches and other hardwoods were used to block all the link roads leading to the City centre otherwise known as Ring road. Markets, banks, schools, shops, and business centres were completely shut down as early as 8 am while hordes of traders and market women who have attempted to resume normal activities were left stranded. Meanwhile, most of the young traders were seen playing football within the market premises while others embarked on physical exercises.

The worrisome situation was a continuation of the occurrences that took place on Sunday with many motorists and residents losing valuables and properties to criminal elements who under the guise of protesters hijacked the process in parts of the City. Thousands of angry youth have in the past few days been protesting against Police brutality and bad governance in the country despite the assurances for necessary reforms by the government. The protesting youths stormed the streets as early as 7.30 am, setting up blockades at different intervals.

Areas mostly affected by the bonfires and Blockades include Sapele road, Akpakpava, New Lagos Road, New Benin-Mission road, Forestry, Mission roads, Ekenwan road, Second Eat Circular road, Ugbowo, Aduwawa-Benin-Auchi road, and Siluko road as well as several others. On Ekenwan Road, from Agho Junction to the popular Ekenwan Military Barracks, the youth converged on Evbotubu Junction, Utagban Junction; First and Second Power Line Junctions; Debvekewen Junction; Leaders College Junction; Ugbihoko Primary School; Aghewwenghe and Uholo, in what turned out to be protested by youths in their various localities. However, residents appear helpless as the main town is on complete lockdown as protest networks almost every nook and crannies of the capital town.

Other areas also affected include Airport Road, Akenzua/Plymouth Road, Ring Road, First, Second, and Third East roads. The protesters with placards chanted “No to SARS” and “Buhari must go”. Sadly, circulation vans of the various newspaper Organisations entering Benin City had a tough time passing the blockades along the ever-busy Ugbowo end of the Benin-Lagos expressway, where the blockades have stretched up to the Ovia River axis, about several kilometres away from the University of Benin, UNIBEN, main gate.

Also, civil servants, artisans, and traders remained trapped as they had difficulties leaving their homes. When contacted, the state Commissioner of Police, Johnson Kokumo, declined to speak

In a related developmemt, Fulani Pastoral Group, Miyetti Allah has described the #EndSARS protests as part of a plot by some Southern Politicians to overthrow President Muhammadu Buhari and force the North to give up its ‘right’ to contest for 2023 Elections.

In a statement made available to journalists, jointly signed by the President and Secretary of the Organization, Bello Badejo and Saleh Alhassan, queried why the protests are still ongoing despite the Federal government’s disbandment of the rogue SARS police unit.

He described the blockage of roads and major highways by the protesters as a scheme to ground the entire country.

“The protests have, undoubtedly, yielded the desired results with the government accepting their genuine demands and working to address all of them. For us, Nigerian citizens came out en mass to demand for justice, and the government responded positively.

“It’s therefore, unacceptable for the protesters to now involve blocking of roads, thereby denying other citizens the right to use the roads. This is an attempt to ground the country and create more suffering in the midst of COVID-19 pandemic.” the statement read in part.

“We have also discovered ethnic and regional colouration to the protests. Some people from certain regions are trying to undermine and overthrow a democratically elected government or intimidate the North to give up its rights to rule beyond 2023.

“Our findings also revealed that the former Lagos Governor is the sole financier of the ongoing protest having lost out in the plans to contest the Presidential election under APC in 2023. His game plan, therefore, is to bring down the administration of President Buhari, since he can longer realise his presidential ambition.

“We will hold him accountable should anything happen to President Buhari’s administration. To avoid this, he must immediately put the protest to an end while the Federal Government put in modalities to address the challenges confronting the nation.”

The only former governor of Lagos state widely rumoured to nurse a 2023 Presidential ambition is Bola Ahmed Tinubu. He has, however, issued a statement denying any involvement in the #EndSARS.

Relaying President Buhari’s opinion on the ongoing#EndSARS protests after their meeting in the Aso Rock Presidential Villa, the Minister further revealed Buhari has vowed to implement reforms he promised.

Dare, who spoke to State House Correspondents after the meeting, added Buhari also appealed to the protesters to give the Federal Government time to address their demands as the team set up has already gone to work.

“He appreciates the fact that they have brought the SARS issues to the fore through their peaceful protest.

“He recognises the fact that they have called upon the government to do what is necessary and that as the President and a father, he will make sure that the demands as put forward are met.

“The President said that as far as he is concerned, it’s important to allow the younger generation to exercise the freedom to protest and make sure that such protest is in a peaceful manner.

“He said that part of the demands that were made is to make sure that those protesting are protected and that any police officer that has in one way or the other attacked any protesters be brought to book.

“So the President thinks it’s a fundamental right, he thinks so long as the protest is peaceful and focused.

“He believes that the youths of this country have the right to demand for certain things”, he said

It has been gathered however, that soldiers have been stationed around strategic places in the federal capital territory (FCT).