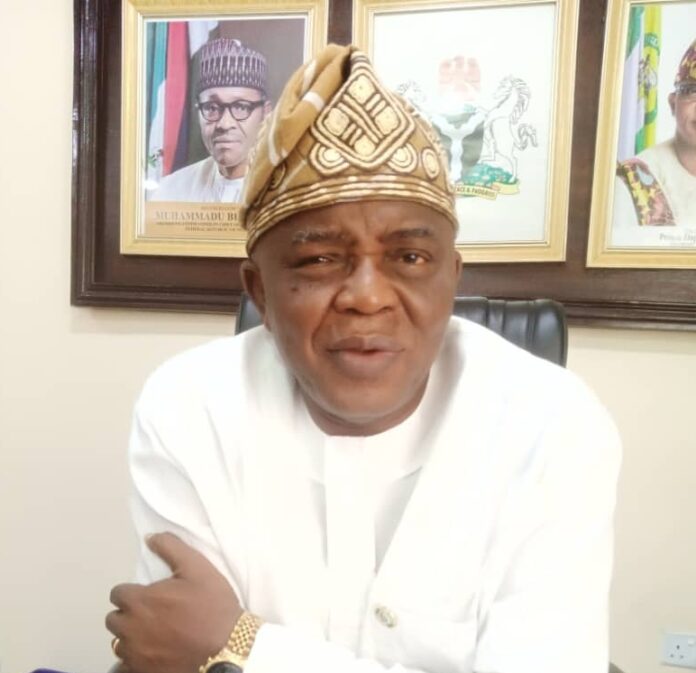 In this interview with Bankole Taiwo, Mr Ola Oresanya, the immediate past Special Adviser on Environment to Gov Dapo Abiodun, who is newly sworn in as Commissioner for Environment, speaks on the efforts to make Ogun sparkling clean, flood free among others.

Congratulations sir on your new role as the substantive Commissioner for Environment, what should be the expectations of the people?

Well, it is a continuation of what we have been doing when I was the Special Adviser to the governor on Environment. It is to keep working for a clean and healthy environment. We must clear our surroundings of dirt, we must work on those things blocking our drainages that will eventually cause flooding which destroys lives and properties. We are also to fight noise pollution as well as air pollution. All the companies working in our midst must ensure they operate according to international best practices. They must not use the operation of their businesses to be polluting the air or the environment. We also frown at those who have turned the major ways into markets. We are not going to definitely tolerate this because of its danger to the public. The last one is those who are in the habbit of defecating in the open places such as beside the roads and all that, we are saying enough of such primitive behaviour. These are some of the mandate we are working with. It should also be noted that I have been in the acting capacity for the Ministry for about a year now.

We are not the one to rate ourselves. It is not the students that rate themselves but the teachers. So, we leave our assessment in the hands of the members of the public and you journalists. They are  the one that gave us this job to do. However, I must say that a lot of work is ongoing to deliver on our mandate.

Recently, it was reported that it was raining ice in some parts of the north and this was alluded to climate change. How can we mitigate the effect of this at our end here?

It is a fallout of what is being said over the climate change and the need for all of us to do our bits to fight off this challenge. Ogun State is even among those that the federal government has commended for being proactive on this issue of climate change. The climate change is real, though it is what has been subject of discussion for over 20 years now. We can see that some weeks past it was very cold than it used to be in the past. Those living abroad had horrible heatwave and there are flooding in some countries like Pakistan. We thank God for being good to us here in the state.

Recently, flood alerts were issued and this affected some communities and local government areas in the state.

Can you give us update on this, I observed that we have not had much of flooding problems in the state this year, what has changed?

Thank you for your observations. Since this government got into power three years ago, we have tried to identify what led to the fatal flooding incident of about four five years ago which led to loss of lives and properties. In the course of our search, we found out that this was due to clustering of the waterways. So, we started a lot of dredging works. This government has spent very heavily on dredging to ensure that water flows freely. We have equally constructed a lot of culverts. We are doing so much of education, to sensitise the residents too on the evil of blocking the drainages. We have equally instituted an effective way to dispose off our refuse at household level. We                                 make sure household waste does not find their way into the drainages again.

On the issue of waste collection by the PSP, it seems that the concentration is on our major cities like Abeokuta, Sagamu etc, you don’t get to see them in other smaller towns, why is this so?

They are everywhere, even though the issue of waste generation and disposal is more of an urban problem. The challenges we are having with people in other smaller communities is that they are not used to storing their waste. They want to dispose it off everyday. Whereas what the law says is that each household is to have a container to keep their refuse, after which the PSP will come for its collection. We are working round this with health officials at the local government.

The Ministry recently sealed off some companies, can you please speak on this?

Yes, it was because they contravened the laws of the state. How could a company be building on waterways. You can’t be using your own convenience to disturb others. Most of them are doing this because they have so much money to claim the land. They would redirect the water into the neighbourhood. That’s wicked and immoral. No responsible government will fold its hand and watch without curbing such illegalities. There were other companies that were sealed for discharging their effluents on the road. That’s very untidy, you don’t do that. Even those releasing harmful gaseous substances into the atmosphere have not been spared. We are always on our toes to enforce the dictate of the law and ensure that our companies behave responsibly.

The fever of second term is pitching up, how confident are you of the second term bid of Gov. Dapo Abiodun in the face of several oppositions?

We are here to talk about governance and not politics. The people elected us to govern and that we have continued to do. It’s now left for the people to do the assessment and determine whether or not they want us back. As far as we are concerned, we shall remain focused, our eyes will remain on the ball and we shall refuse to be distracted by the ranting of the opposition that may want to hinder us from delivering  dividends of democracy for the people. The aim of the opposition is to distract but we remain focused.

What is your take on those still practicing open defecation as well as the waste to wealth initiative?

We won’t take it easy with people who think they can defecate anywhere. No, there is no begging on this primitive act. The government will go after such people and ensure that they are adequately punished for violating its environmental laws.

And for those interested in waste to wealth, we have told them to get back to us. Let them get in touch with our office and we shall hand them over to those who will put them through. All that we call dirt is what is making many of these Europeans and Americans to troop into the country. They would come here, make huge money on what we call waste and dirt, while we are traveling down to their place to look for money. They come to us here in Nigeria to make so much money from what we regard as trash.

There is no faction in Osun PDP  — Hon. Isaac, PDP Chieftain