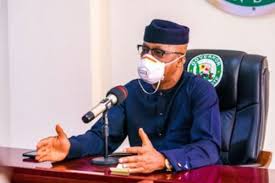 In a bid to further get grassroots support and backing for the fight against human trafficking, the governor of Ogun State, Prince Dapo Abiodun has appointed three traditional rulers as members of a 42-member Task Force Team to prevent human trafficking in the state.

Other members include representatives of youth organizations, various professionals including security specialists across the state while Hon Akingbolahan Adeniran, the Attorney General and Commissioner for Justice, is the Chairman.

Speaking during the inauguration, Dame Julie Okah-Donli, the Director General of NAPTIP charged members of the Task Force to gird their loins in readiness for battle against the criminals who traffic in humans.

Dame Julie Okah-Donli explained that the human trafficking crime wasn not strange to the state as indigenes of Ogun State take significant percentage of rescued victims.

Earlier, both Ogun State Attorney General, Akingbolahan Adeniran and Commissioner for Women’s Affairs, Hon. Olufunmilayo Efuwape had reeled out the mandate of the NAPTIP and the Ogun State Task Force Team.