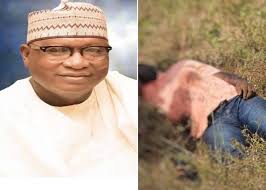 The Nasarawa State Chairman of the All Progressives Congress (APC), Mr Philip Shekwo, who was abducted by gunmen on Saturday, has been found dead.

Commissioner of Police in the state, Mr Bola Longe told journalists on Sunday in Lafia that the lifeless body of the victim was found in a farm, some metres away from his Bukan-Sidi residence where he was abducted.

According to Longe, investigation has begun to unravel those behind the dastardly act.

He said that the distance from his residence to where his corpse was found, coupled with the fact that there was no demand for ransom suggested a case of assassination rather than kidnapping.

He, however, noted that investigation would determine whether it was assassination or not.

“The intensity of the bullet marks on the wall and the frantic effort to gain entrance into the deceased’s house is pointing to the fact that it is more than a case of kidnapping.

“Then, where we found his body now is too close to the house.

“Usually, when kidnapping is carried out, it is for profit, but when within a twinkle of an eye the man is killed without any demand whatsoever, I think it’s assassination.

“That not withstanding, we (Police) are going to carry out exhaustive investigation into the matter,” the commissioner said.

Longe had earlier confirmed the abduction of the APC chieftain from his residence in Bukan-Sidi, Lafia, around 11 p.m. on Saturday and taken away to an unknown destination.

He said the police had deployed officers on a search-and-rescue operation only to find his lifeless body in the area.

In the meantime, President Muhammadu Buhari on Sunday deplored the killing of Shekwo, saying the nation’s security system must do more to end the incidents of violence in the country.

The President welcomed the decision of the Inspector General of Police to send reinforcement of men and materials to the state.

The late APC Chairman was shot twice leading to his death. Police investigation is expected to determine if this was an assassination or kidnapping-related murder.

In his reaction to the tragic incident, President Buhari, while commiserating with the family of the deceased, said:

“I strongly condemn the killing of Philip Shekwo. He was kind and jovial. His contribution towards strengthening the party in Nasarawa State will not be forgotten. May his soul Rest in Peace.”

Also, the national secretariat of APC has charged the Nigeria Police Force and other security services to fish out the killers of Shekwo.

The party’s Deputy National Publicity Secretary, Mr Yekini Nabena gave the charge in a statement on Sunday in Abuja.

“This is a dark day for the APC family, we condole with the late Shekwo’s immediate family, the governor of Nasarawa, Abdullahi Sule, the State Working Committee, the party’s supporters and members over the killing.

“We urge a thorough investigation by the police and other relevant security service to quickly fish out the sponsors and perpetrators of this evil,” Nabena said.

He stressed that the perpetrators should be made to face the full weight of the law.