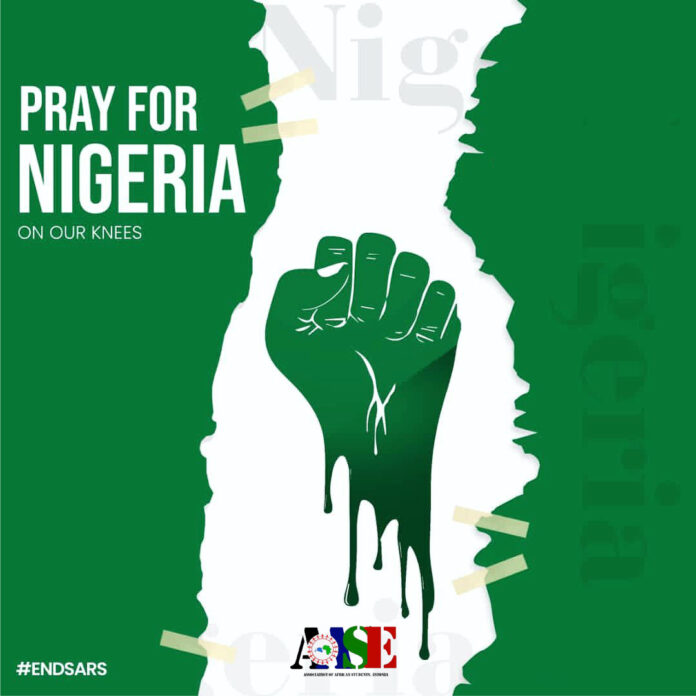 This is was contained in a statement signed by AAES’s President Mr. Daniel Ita today, Wednesday.

Ita called for the intervention of Nigerians at home, abroad and international community to avert further crisis degeneration, anarchy.

“This is coming on the hills of the request made by Nigerian youths for the disbandment of the Special Anti-Robbery Squad (SARS) captioned #ENDSARS. Over the years, this unit of the Nigerian Police force has been accused of harrasment and maiming of innocent citizens.

“These accusations on several ocassions have been made to the Nigerian government and the Inspector General of Police had on different times, pronounced the disbandment of this unit but in reality it still exists.

“What started as a call for the #ENDSARS movement, made the leadership of the police force to respond by pronouning the disbandment of this unit and immediately pronounced the formation of another unit code named SWAT as a replacement of SARS.

“The angry youths felt they were being manipulated into believing that this was the end of the dreaded SARS and as such, resisted the call to end the peaceful protest.

“It is on video footages that at no point in the cause of the protest, were the youths seen carrying arms, yet the military attacked the protesters, lives were lost and many severely injured. “We call on all Nigerians within and outside the country, African countries as well as the international community to prevail before the situation degenerates into anarchy.

“What the Nigerian people are requesting is total reform of not just the security forces but also the general administration of the Nigerian state, with all its abudant resources still have lots of people who struggle to make a living. African students in Estonia says no to police brutality and yes to total reform”, the statement concluded.