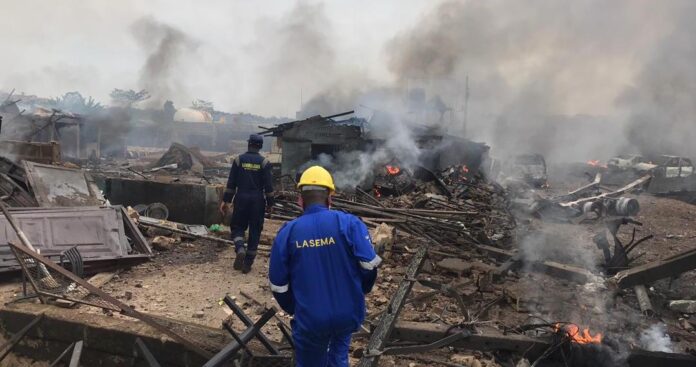 The incident happened 24 hours after a petroleum tanker exploded and killed over 20 persons at Felele, in Kogi.

Our Correspondent gathered that the gas tanker explosion occurred at about 3.30 p.m.

Although no life was lost, at least 50 people have said to have been critically injured and taken to the Iju Water Works clinic.

Dr Olufemi Oke-Osanyintolu, Director-General of the Lagos State Emergency Management Agency (LASEMA) confirmed the incident to newsmen at the scene of the explosion.

Oke-Osanyintolu said 16 persons have been confirmed to be critically injured and taken to the Iju Water Works clinic.

He explained that a 30 ton LPG Tanker, being operated by Mana Gas Ltd., but which registration number could not be ascertained, was involved in an explosion.

He said that LASEMA responded to distress calls concerning the explosion and quickly mobilised to the scene.

According to him, the explosion destroyed several vehicles, one event Centre and a Plank Market in the area.

“The responders discovered that a compromised seal device by the truck driver had led to gradual leakages, which then ignited fire when the tyres burst.

“Several people were injured and have been taken to the nearest hospital for treatment,” Oke-Osanyintolu said.

Other emergency responders at the scene were the Lagos State Fire Service, the Nigeria Police Force and NSCDC.

Farinloye said the Lagos incident occurred at 3.05p.m. when the gas tanker, which was trying to enter Cerato Gas Plant located in the area, suddenly went up in flames.

“Also damaged were; a block industry and an attached office, a cement store and a sawmill and several stores where building materials are being sold.

“The people injured were immediately taken to the Water Works Clinic. 15 people were admitted there.

“Two that were critically injured have been referred to the General Hospital. Three are presently on admission and are being observed.

“The remaining 10 had minor injuries and have been discharged.”

“The response was swift and the fire has been extinguished. Some of the injured persons told us that they immediately jumped into a nearby canal which was filled with water as it rained today.

“That is one of the major reasons that there was no fatality,”he said.

In a related development, the Corps Marshal and Chief Executive Officer of the  Federal Road Safety Commission (FRSC) Dr Boboye Oyeyemi says that 30 per cent of truck drivers in the country have failed vision tests conducted by the commission.

Oyeyemi  made this  known at the 2020 Truck Renewal Conference in Abuja on Thursday.

He said that most of the truck drivers had eyesight challenges and it had made it more dangerous for them to drive at night, describing  most of the drivers as “lawless.”

He said that most of the trucks plying the road did not operate with the minimal safety standard which, according to him, had contributed to the cause of many road accidents.

“We need to take action; 30 per cent of drivers failed the vision tests we conducted. I commend MOMAN because most of its members comply to minimal safety standards but the others are yet to do so.

“Just yesterday, a whole family was wiped off to an accident caused by a truck with petrol in Felele Lokoja; this is avoidable if the minimal safety measures were adhered to.

“This is the time to stop all  talk  and swing into action to avoid the reoccurrence of these on our roads,” he said.

Oyeyemi said that MOMAN and NARTO with the Department of Petroleum Resources (DPR) should  join forces in  ensuring  that drivers complied with  the rules and regulation of traffic while driving their trucks.

The FRSC boss commended the effort of president Muhammadu Buhari’s administration at  reviving the rail system, saying that it would help to reduce the over reliance on the road for haulage of Petroleum products.

“If the rail is functioning well, pressure will reduce on the road,” he added.

He called for full auditing of trucks and installation of safety valves on the trucks before using them on the road.

“MOMAN and NARTO must train and retrain their members, and DPR needs to begin recertification to help reduce crashes on the road.

“The level of lawlessness is high on the side of the drivers, we witness average of 90 deaths per week in the country,” he added.

MOMAN Chairman, Adetunji Oyebanji  described the theme of the Conference as “apt” judging by the situation of safety in transportation value chain in the country.

He said that globally, products were transported through the pipelines but that had stopped over the years in Nigeria due to lack of integrity.

He said that about 10,000 trucks move from south to northern part of the country with about 80 per cent without skid, automatic breaks and other equipment needed for safety.

“MOMAN is working to ensure replacement of trucks that do not meet safety requirements. We are here today to discuss framework on truck renewal.

“NARTO and MOMAN believe that safety of the road is possible, we will collaborate with FRSC to ensure training of drivers,” he said.

He called on marketers to ensure efficiency in product delivery adding that efficiency will help marketers to remain afloat with the deregulation of the downstream oil sector.

Also, minister of state for Transportation Gemisola Saraki called for adherence to safety measures on the road.

She said that most of the accidents on the road were caused by human factors such as using the mobile phone while driving, dangerous driving style, overspeeding among others.

“Road crash is an epidemic in Nigeria and has caused more deaths than diseases. It can be avoided if drivers can be disciplined,” she said.

Represented by Mrs Angela Keyede, Assistant Director, Transport, she said that Government had embacked on road rehabilitation to address some of the challenges.

“Government is also reviving the rails but I urge you to ensure replacement of old trucks with modern trucks to reduce dangers of crashes on our roads,” she added.

The National president of NARTO,  Alhaji Yusuf Othman, said the group remained relevant in the supply chain of  petroleum products in the country.

He said that nearly  58 million litres of petrol  consumed on daily basis in the country were transported by its members, adding that government had yet to make policies to attract investment to the sector.

He assured that its member would comply with  the safety measures  so as to reduce the number of road crashes in the country.