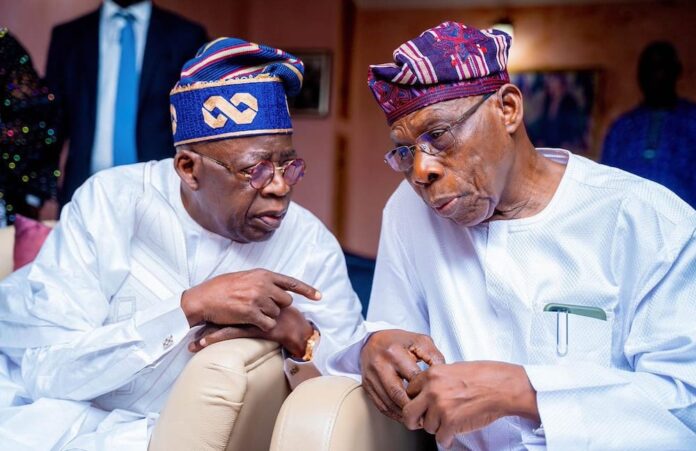 …Says ‘I am in Ogun to just say hello’

Asiwaju Bola Ahmed Tinubu who arrived at the former President’s residence around 1 p.m. came in the company of the Speaker of the House of Representatives, Rt. Hon. Femi Gbajabiamila, Chief Bisi Akande, former interim Chairman of APC and  Nuhu Ribadu, former EFCC, Chairman.

Asiwaju Bola Ahmed Tinubu in company of other political leaders thereafter proceeded to have a closed door meeting with Chief Obasanjo and came out about one and half hour after without addressing the press.

His coming had coincided with the celebration of the 2022 Artisans’ Day in Ogun held at the MKO International Stadium, Abeokuta.

Addressing the artisans at the programme, the APC Presidential candidate said he was in Ogun State to just say hello because the campaign has not started.

He later joined the State Governor, Prince Dapo Abiodun to present to the artisans a new bus.

Speaking earlier, Gov. Abiodun welcomed the APC presidential candidate to the state saying that the artisans were no doubt fortunate to have had the former Lagos State Governor in their midst.

Abiodun lauded the artisans for being the heartbeat of the fast growing economy of the state with creation of various employment opportunities saying that his government would always support them to flourish the more in their various businesses.

He has therefore urged for a meeting with the leadership of the artisans in an attempt to forge a more cordial working relationship that would further enhance their various businesses.

Cmr. Ayodele Anthony, Chairman of Ogun Artisans while speaking at the occasion lauded Gov. Abiodun for his various support for the artisans and which had impacted their various enterprises.

Anthony has however asked for more support from the State Government especially in the area of soft loans for the artisans as well as four buses for each of the four divisions in the state.