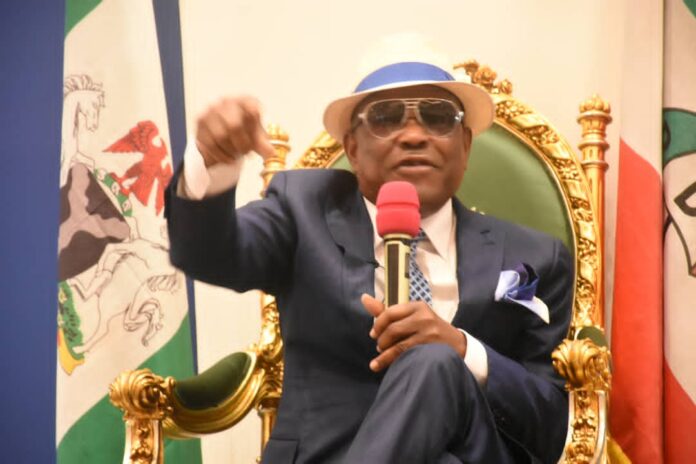 ..Insists he must resign as National Chairman

The Rivers State Governor,Barr Nyesom Wike has insisted that for the People’s Democratic Party(PDP) to win the 2023 general elections in Nigeria, the National Chairman of the Party,Sen Iyorchia Ayu must do the needful by resigning his position.

Wike stated this Friday in Port Harcourt,during a media parley with journalists. He said this is in consonance with the party’s Constitution and for justice, fairness and equity.

The governor said a situation where a presidential candidate will come from the north and National Chairman also from the north, is to say the least unfair.

Wike also alleged that Ayu had told him in confidence that once a presidential candidate candidate emerges from the north,he would step down. He said he is challenging him to deny it.
“I challenge Ayu to deny it. I believe that justice, fairness and equity should prevail for our party to move forward. So Ayu has no alternative than to resign. He should not allow this opportunity to Passover PDP now that Nigerians are tired of the All Progressives Congress(APC) and want to vote for PDP.

There must be sacrifice,so if Ayu loves the party,he should do the needful and that is to step down. We are not removing him,but we are asking him to make sacrifice by resigning as party National Chairman,” Governor Wike emphasized.

The governor said Ayu’s continuous refusal to resign is portraying PDP as a party that is not trustworthy, because if the National Chairman of a party cannot honour an agreement. “Is such party qualified to be supported by Nigerians or electorate,” he queried.

On whether he thinks or knows that a lot of Southern governors are not supporting his view on Ayu’s resignation.
Wike said it is in their own interest to support the crusade for fairness, justice and equity.

“I appreciate the Southern governors and everybody should be bothered that the National Chairman of PDP and Presidential Candidate are from the north. If APC could stand its ground that the Presidential slot must go to the South, bearing in mind that the current President is from the north,why can’t PDP follow suit. It is a national problem,” Wike said.

The governor was of the opinion that if the Presidential Candidate of PDP is from the north, the National Chairman must come from the south for equity and justice and to balance the political equation of the country.
Asked if Ayu finally refuses to resign,what will be his decision or action?

The governor said untill that happens, nobody should predict his action. According to him,it is natural that you cross the bridge,when you get there and not before then.

Commenting on the claim that PDP can do without him in prosecuting the 2023 general elections,Wike said PDP can go ahead to experiment that, pointing out that the party can do that nationally, but not in Rivers State and with a governor that has delivered his promises to the people.

On whether he does not risk being suspended from the party based on his position about Ayu,governor Wike said he is not bigger than the party, but that there could be some consequences to such action.

He lamented that now that Nigerians are not happy with APC and are ready to vote for PDP,Ayu should not allow APC to continue in office in 2023.

“Nigerians are not happy with APC, PDP is preparing ground for them to continue in power with the internal crisis that is avoidable,” Wike posited.