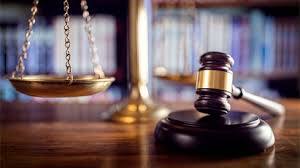 Two men, Dele Olabiyi and Saheed Adebowale, who allegedly robbed seven people of their phones and laptops valued at about N1.4 million, appeared before an Ikeja Magistrates’ Court on Friday.

Olabiyi, 27 and Adebowale, 27, who reside at Abule-Egba area of Lagos, are facing a two-count charge of conspiracy and stealing.

They, however, pleaded not guilty to the charges.

The Prosecutor, ASP Ezekiel Ayorinde, told the court that the defendants committed the offences with some others, still at large, on April 11 at Meiran area of Lagos.

Ayorinde said that the defendants robbed seven persons of their property valued at N1.383 million.

“The defendants also stole seven phones and two laptops worth N573, 000 from the other complainants who were only identified as Amutan, Fagbenro and Abdullahi.

Ayorinde said a vigilante group in the area arrested the defendants while the others escaped.

“Four laptops and six phones were recovered from them which they cannot give account of and they were handed over to the Police,’’ the prosecutor told the court.

He said that the offences contravened sections 297 and 411 of the Criminal Law of Lagos State, 2015.

The Magistrate, Mrs O.A. Olayinka, granted the defendants bail in the sum N300, 000 each with two sureties each in like sum.

Olayinka said that all the sureties should be gainfully employed with evidence of two years tax payment to the Lagos State Government.

She adjourned the case until Nov. 11 for mention.